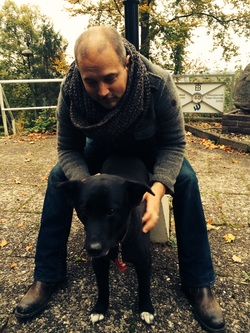 Jason A. Cheek, the author of The World & The Last Paladin series, works in Germany due to his current job assignment. He lives with his wife and daughter, along with their two dogs Monty and Melow (rescue dogs from Greece). Originally from West Palm Beach, Jason lived most of his early life in Florida, except for when he was serving in the military or traveling for his job.

Always feeling like he was born out of time from an early age, Jason’s interested ran the gauntlet of martial arts, swords, archery, Dungeon & Dragons, the SCA (Society of Creative Anachronisms), reading Sci-Fi, and Fantasy. After leaving the service, Jason taught himself computer support and networking by his hobby of computer gaming.

Working eighty plus hours a week as a waiter, Jason put himself through college, studying to be an Occupational Therapist Assistant. In the end, he ended up becoming an Information Technology Professional due to his many hours of playing first person shooters and strategy games at LAN parties around the United States or logged into Anarchy Online and World of Warcraft leading his guilds.

Excelling in his career as an Information Technology Specialist, Jason was able to get a job traveling the world. During that time, he became interested in motorcycles, skydiving, white water rafting, scuba diving, and other extreme sports. Moving to Germany after meeting his Polish wife, he taught himself German and Polish, settling down in Europe with his current job and started writing books.