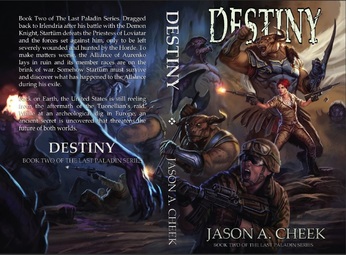 Completing the second book of the Last Paladin Series took a lot more time than I'd originally expected. While the primary reason this took so long was due to not being able to focus solely on writing, the secondary reason was because I wanted to make sure Destiny was a solid action packed story with a twisting plot that held my audience. Where Flight was fun and action packed, I strove for a deeper story that introduced the races and world of Irlendria. A delicate balance that I felt like I achieved by the end of the story.
​Destiny:
​Book Two of The Last Paladin Series. Dragged back to Irlendria after his battle with the Demon Knight, Startüm defeats the Priestess of Loviatar and the forces set against him, only to be left severely wounded and hunted by the Horde. To make matters worse, the Alliance of Aurenko lays in ruin and its member races are on the brink of war. Somehow Startüm must survive and discover what has happened to the Alliance during his exile.

Back on Earth, the United States is still reeling from the aftermath of the Tuonellian’s raid. While at an archeological dig in Europe, an ancient secret is uncovered that threatens the future of both worlds.