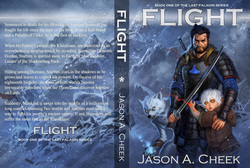 After reading books for years and playing video games with great stories I wondered why I wasn't writing. I had stories bouncing around in my head forever and one day after playing some Star Wars Old Republic I decided I was going to sit down and write one of my dreams/stories that had been forever in my head.

Once I started putting the story down on paper it became the modern paranormal urban fantasy story you see now with Anti-Terrorist Units, SWAT Teams, Police Detectives, Paladins, Werewolves and Demons.

Flight:
Sentenced to death for his Bloodright, Startüm Ironwolf has fought for life since the time of his birth. Born a half-breed and a Paladin of Ukko, he is the first of his kind.

When his Father’s people, the Klavikians, are destroyed in an overwhelming surprise attack by invading Toenellian Demonic Hordes, Startüm is spirited away to Earth by his Grandsire, Leader of the Shadowfang Pack.

Hiding among Humans, Startüm lives in the shadows as he grows and learns to control his powers. On the eve of his eighteenth birthday, the fates of both worlds become irrevocably entwined when the Tuonellians discover Startüm on Earth.

Suddenly, Mankind is swept into the middle of a millennium long conflict spanning two worlds and Startüm must find a way to fight his people’s ancient enemy. If not, Humanity will suffer the same fate as the Klavikians.